My daughter has made her school’s soccer team and is playing in a tournament today. Hurray, the Campbell traditions continue.

I decided that I would share the history of my soccer prowess with her, to spur her on to greatness on the pitch today.  I’ve played the world game across the world, even as far away as England, and dribbling my skills before Englishmen, Scots, Irish, Welsh, and players from across Europe. My football history (we true appreciators of the game should never refer to it as soccer, so very American!) belongs to the annals of the game.

During my first match in England, I started on the bench. This is understandable for I was new to the team and they had only seen glimpses of what I was capable of during training. I finally got my chance. I ran onto the pitch, ran up and down tirelessly, and up and down once more, and touched the ball off the boot with a deftness that few can imagine. 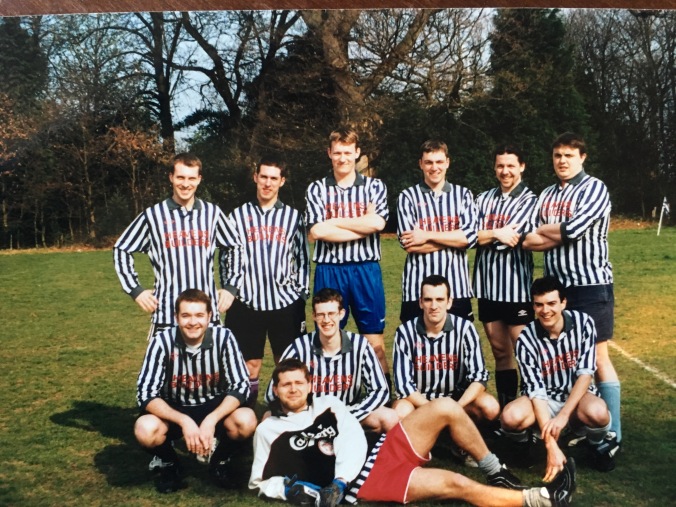 We’ve all seen how difficult it is for sportsmen to transition from one code of football to another. The Rugby into AFL experiment proved to be an enormous and undeniable success: it can’t be done! At training one Tuesday evening, I forgot that I was playing the ballet of football, for anytime I was within metres of another play I was meant to fall down, contort my face, and let out a cry. Instead, I knocked the team Captain to the ground and awarded him concussion for the night.

It’s one thing to lapse into old habits during training, but AFL is in the blood of Melbournians. One game, one infamous game between Cornhill and Oak Hill, instincts took over when I rushed forward to stop the Oak Hill midfield who were fast nearing their goals. One Marcus Nodder (if my memory is right) was dribbling just inside the box when from behind I launched my body into his and tackled him successfully to ground. But being soccer, instead of me being awarded a free kick, the whistle blew for a penalty and the soon scored.

My stint as a defender was short lived. I volunteered to kick the ball in instead of our goalkeeper. It left the foot awkwardly but found a player with precision…from the opposing team who then quickly steamed forward and kicked a goal.

By the end of the game, few of our team were standing. Rolling on the pitch in uncontrollable laughter and bursts of hysteria, Oak Hill tried to take the advantage but you see our team had two secret weapons, and none of them was the young lad from Melbourne Australia. We won. I won.

A year later, now being assigned to Sydney, where all the former greats end their careers, I found myself once again putting on the footballs. I was playing for Moore College (yay…boo…and yay some moore), and we were entering the annual grudge match against Morling College. During an intensely fought game for ecclesiastical superiority, the moment arose and I found the ball at my feet. With a swift motion and without thought, I curled the ball into the net and SCORED!!! One team was overjoyed, the other not: 1-0 to Morling. From that day forward I was treated with suspicion at Moore College and was called to undertake special education classes. The situation became so perilous that the Archbishop visited my year and warned us against the perils of Baptists. Let the reader understand, Morling is Baptist and Moore is Anglican. As a Baptist, I was naturally conflicted, torn, rent asunder.

By the time I finished sharing these exploits with my daughter she had long left the room with her eyes still rolling and wondering if I truly understood the definition of prowess.