Ok, I’m reading George Orwell’s 1984 at the moment, as it seems many people are doing! Leaving aside the somewhat hyperbolic imagery, there are important observations to be made regarding the interactions between Churches and the public space.

Would you like the media to enter your home and report to the world what was spoken? Would you appreciate a journalist attending a local club meeting and sharing the juicy bits on social media? Are you ok for a reported to look around your Facebook page and to publish content on a newspaper?

This week Israel Folau has provided our media with a new installment of gossip, slander, and innuendo. He was preaching on Sunday at his church in Western Sydney and the sermon was uploaded to the church’s Facebook page. It’s not as though a journalist took the time to visit the church and to hear everything that was said and done that morning and to observe all of Izzy’s words and interactions that morning. Rather, they listened to the sermon (and quite possible only parts of it), and with the nuance of a tank the headlines in our newspapers were,

Rugby Australia, Qantas, and much of the media have already succeeded in their quest to have Folau sacked and publicly disgraced for comments he made earlier in the year on social media. It appears as though the wolves are still hungry for more. 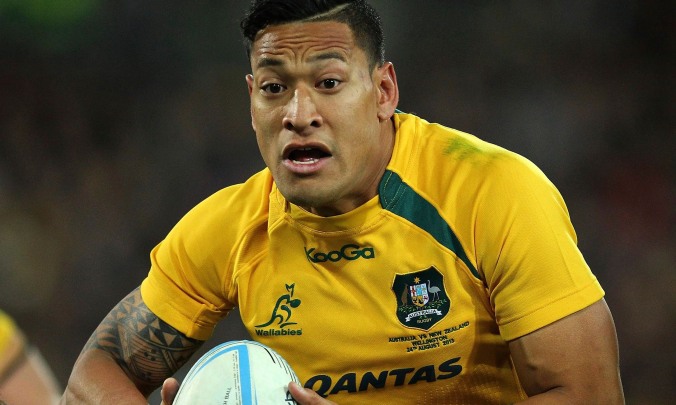 This isn’t the first time that journalists have taken the courageous step to digging up church sermons in order to publicly tar and feather Christians. Back in 2016, there was a media campaign to have churches banned from renting public buildings in schools on the Central Coast, NSW. These churches were accused of homophobia and inciting hatred against gays and lesbians. Of course, this wasn’t the case, but telling the whole truth doesn’t always fit the narrative that click-bait journalism is seeking to portray.

There is today a growing antagonism toward Christianity, at least much of the media and among the back slapping cultural dominants in Australia. We are to be suspicious of Christianity. Engaging with the Christian message on its own terms isn’t required anymore, but ignorance necessitates a flurry of rhetorical bashing against those who believe Jesus is Lord. Of course, recent scandals and sins among some Christian organisations have understandably dented public trust. It would be unhelpful to judge those who judge churches for the terrible things down by supposed ‘men of God’. Nonetheless, the Folau controversy has nothing to do with these issues.

There are States around the world where officials are sent to visit local churches, to check on what is being taught and said. Thank God that’s not happening here in Australia. Instead, we use the media and public opinion to manipulate and to scare.

The media’s trolling of Israel Folau’s church raises questions about the dynamics and interactions between Churches and outside entities. Consider these other recent inquisitions:

Of course, the situation differs from State to State, and from school to school, and from club to club. Many Aussies are reasonable and fair and think that the ‘God’ police are ridiculous and overreaching their authority.  The situation before us is one where secularists are attempting to take religion out of the public area and they are also beginning to step into the religious and to make pronouncements about that space also. This is somewhat concerning.

With the restoration of the monarchy in 1660, the freedom to preach was taken away in England. Preachers and pastors who didn’t comply with the State’s oversight of religious affairs were imprisoned and congregations shut down. We may look back to that era and think how ridiculous and unnecessary it was. Of course, we don’t want Government intruding upon traditional religious beliefs and practices. Don’t we believe in a separation of Church and State? This distinction never meant that there is no overlap between religion and State, for that is an impossible and undesirable position to hold. To make the public square and the political arena void of religious ideas is to attempt the status quo of China. As China exemplifies, it is an impossible task because it necessitates the Government to introduce policies about religion and to intrude into the religious space as well.

I am not suggesting that journalists, skeptics, and the irreligious shouldn’t visit a local church or listen to their sermons online. This blog regularly has journalists, social commentators and politicians reading it. Hey, I’d love them to also listen to our sermons at Mentone Baptist Church, so long as they quote words in their real context! Better still, come and visit us on Sundays. But there is also an element of hypocrisy in the interest surrounding Folau’s sermon at his local church. At a time where the secular world is wanting to squeeze religion out of the public sphere, the same people are peering into the religious arena and wanting to interfere that in that space.

This is not all bad. It’s a good opportunity for churches to ask some important questions. Why do churches post sermons and messages on websites and social media.? Is it for public consumption and education? Is the aim to provide a service to church members who couldn’t be present for that Sunday? Who the intended audience is and who else may end up listening?

If a church isn’t prepared for ‘outsiders’ to listen and to critique, my advice is, don’t publish your sermons online. Do we however really want to create a culture in Australia whereby churches no longer feel free to publish sermons online or are pressured into leaving out bits of the Bible because of who might hear and report on it in a skewed fashion? At the same time, there is a positive lesson and opportunity here. Preachers ought to take care of what we say and how we speak these words. This is no reason for watering down the good news of Jesus Christ but it is a great incentive for us to teach with clarity and compassion, faithfully and thoughtfully.

John Bunyan lived at the time of the restoration and was imprisoned for his preaching and for organising a church gathering that wasn’t sanctioned by the Government. His initial term of imprisonment was extended from 3 months to 12 years because he refused to cease preaching upon release from jail.  He famously said,

“What God says is best, is best, though all the men in the world are against it.”

This isn’t an argument for blunt and insensitive preaching. Bunyan wasn’t suggesting that we teach the Bible without appreciating its nuances or ignoring the real lives of the real people who are listening. The conviction was that truth and goodness is not defined by a poll or by the academia or even by the Government, but by God himself as revealed in his written word about his Son Jesus Christ. It is a word that challenges our moral preferences and even our deepest heartfelt intentions, not to crucify us but to redeem us and to fill us with a life of immeasurable joy.

At the end of the day, what we are discovering is that Aussie society doesn’t know what to think of Christianity. And I suspect many Christians are also unclear and they are unsure about how to go about relating to the broader culture: to love, be kind, and to relay a message that many find unfit for human consumption.