Israel Folau is in trouble once again for espousing views that are in line with 2,000 years of orthodox Christianity. This is not the first time that he garnered the fury of the cultural watchdogs and has found himself reported to the governing authorities of Rugby Australia.

Yesterday, Folau posted 2 comments on Instagram which garnered immediate anger and disappointment, such that it is the subject of newspaper articles and television reporting today. 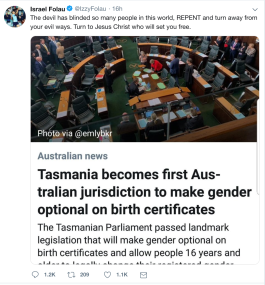 Israel Folau is one of the great rugby players that Australia has produced in the past 20 years. His reputation on the field has excited spectators, and off the field, he has defied cultural messaging and created national consternation: what to do with a national sporting star when he won’t conform to the moral narrative of today’s Australia?

1. Social media is a problematic medium.

I am increasingly convinced that social media is not a particularly constructive medium for conveying important messages. Pithy statements are too often misunderstood and taken out of context. On this occasion, the issue isn’t that people are misreading Folau, but that he hasn’t said enough. A photo on Instagram or a 240 character tweet often doesn’t suffice. I don’t offer an answer for resolving this perpetual problem with social media, but I am observing that it does exist, and it is a problem not only for people we agree with but also among those with whom we disagree.

Perhaps one forward step would be to ask for clarification; what do you mean by that tweet? Can you elaborate and tell me more so that I can understand where you are coming from?

“Let your conversation be always full of grace, seasoned with salt, so that you may know how to answer everyone”. (Colossians 4:6)

“in your hearts revere Christ as Lord. Always be prepared to give an answer to everyone who asks you to give the reason for the hope that you have. But do this with gentleness and respect…” (1 Peter 3:15)

I am not about to lambast Israel Folau for not being as irenic as perhaps we might prefer. He certainly has more courage to speak Bible truths than do many of our Bishops and Christian leaders across the country.

What we say matters enormously. The content of our speech either reflects our deeply held beliefs or it betrays them. How we speak also communicates volumes to those who are listening. I don’t know Israel Folau nor his heart and motivation. I appreciate why some people might read his comments as coming from a frustrated or even angry man. Of course, he may well be expressing heartfelt concern and earnestness for his fellow Australians. If Israel reads this blog post, I would gently suggest that his comments could be improved if they reminded his followers of his own need and thankfulness for God’s mercy to him; Christians don’t want to give the impression that we are somehow morally or intellectually superior to anyone else. While quoting Galatians 5:19-21 Folau could also have mentioned some of the wonders and goodness that comes from knowing the transformative power of the Gospel of Jesus Christ, as Paul describes in Galatians 5. For example,

“13 You, my brothers and sisters, were called to be free. But do not use your freedom to indulge the flesh; rather, serve one another humbly in love. 14 For the entire law is fulfilled in keeping this one command: “Love your neighbor as yourself.”

The good news of Jesus Christ is salvation from hell and it is salvation to a new and better life. The Gospel is the greatest story ever told and it is one that can become my own as I accept God’s assessment of me and trust God’s answer for me.

3. Don’t expect the culture to endorse the Gospel of Jesus Christ.

This shouldn’t surprise because it is, after all, the Bible’s own presentation of humanity. People don’t accept God on God’s terms. Instead, humanity has a very long history of showing intent to redefine and deconstruct God’s righteousness in order to justify their own moral proclivities. The Apostle Paul’s words remain true today,

The Christian message is both compelling and repellent, attractive and offensive. We should present the good news of Jesus Christ with clarity and kindness and with unction, and still, there will be people who object and are even angered. Remember the greatest Christian preacher and apologist of all time, Jesus Christ. No one spoke a more compelling story than Jesus and yet the social elite could not tolerate him, not least because he would not abide by the sexual ethics of the day.

The media are particularly upset by Folau including homosexuality in his list of sins. Had he limited his list to adultery, lying, and stealing, people might have laughed but we wouldn’t see the kind of reaction that we’re observing today. Folau’s heresy is that he doesn’t fully and without qualification, affirm LGBTIQ lifestyles. He contravened the moral law of the land and no one, not even a sporting great, is allowed to get away with such blasphemy.

The response in the media and by Rugby Australia’s need to have the matter investigated once again highlights our society’s view of Christianity. Effectively what Israel Folau has done is quote the Bible and summarise part of the Gospel message. Are we really at the stage in Australian society where Australians are to be publicly castigated for quoting the Bible? Are we prepared to enter that ominous space where nations like North Korea, Saudi Arabia, and China, already belong, namely to prohibit Bible verses and Christian messaging? Are beliefs consistent with 2000 years of Christian faith now to be defined as hate speech?

The reality is, the only version of Christianity our society is willing to accept is a Christianity that has all its edges cut and its heart and skeleton removed. The only acceptable Christianity is a dead Christianity, where Jesus is no longer Lord and where he doesn’t need to save because we are without sin. Jesus is nothing more than the candyman, handing out spiritual tips to people who haven’t yet grown up and realised that the world is without ultimate meaning and design.

The word on the street today is less about Israel Folau holding his beliefs or not everyone is saying that he shouldn’t have freedom to speak his views. The message being proclaimed by commentators including Peter FitzSimons is  that Folau’s contract must be terminated,

“His contract will be suspended or terminated on the grounds of having breached either rugby’s social media policy or his contract.

Rugby Australia simply has no choice.”

In other words, you have the freedom to speak but should your words fail the test of modern secularist orthodoxy, your words will cost you.

The headline in today’s Fairfax newspapers is telling,

“Until Folau repents, Australia has no choice but to let him go”.

This is only the latest of a growing number of examples of Aussie Christians facing job loss and financial cost for choosing Jesus. There is no tolerance, no accepting of religious opinion that deviates from the proscribed agenda. There is only space for the dogmatic preaching of conformity to the storyline of authoritarian secularists.

5. Jesus was serious when he spoke about taking up a cross and following him

Notice the deathly silence from Christian leaders once again, as we squirm with the uncomfortable knowledge that we agree with Izzy even if we would say things a little differently. This is another awkward day for Aussie Christians because one of our own has let the cat out of the bag, and if we’re being honest, we’d prefer if he hadn’t. I wonder, what does this say about us?

At the time when Israel Folau was the subject of similar controversy last year, I wrote

“As a nation we are struggling to cope with societal pluralism. Sexuality has now been defined in such strong terms, that alternative views, as reasonable and loving as they may be expressed, are now perceived as evil and unacceptable. It’s reached the point that sporting codes are now making theological commentary, and assuming a position on hell. Unfolding before us is another test for Australian society. Are we serious about religious freedoms and freedom of speech, or does the rhetoric only apply when beliefs fall into line with the new sexual morality? Do we accept that millions of Australians don’t subscribe to the now popular view on marriage and sexuality, and that these Australians have a right to express their opinions? While politicians and company CEOS and sporting organisations wrangle over a position on religious freedom, it is even more important for Australian Christians to be thinking through these issues. What do we really believe? How can we best communicated what we believe? What are prepared to lose for the sake of knowing Christ Jesus as Lord?”

Even though Folau’s sporting future remains uncertain, his testimony presents a challenge to the rest of us Aussies who profess faith in Jesus Christ. Would we be prepared to walk away from job security? Would we be willing to give up a lucrative income? Are we ready to embrace public abuse?

Our Bible text for this Sunday at Mentone Baptist Church is Matthew 16:13-28. Following Peter’s confession that Jesus is the Christ, Jesus began to explain that he must suffer and die. When Peter rebuffed Jesus for suggesting such a crazy idea, Jesus then explained,

“Whoever wants to be my disciple must deny themselves and take up their cross and follow me. 25 For whoever wants to save their life will lose it, but whoever loses their life for me will find it. 26 What good will it be for someone to gain the whole world, yet forfeit their soul? Or what can anyone give in exchange for their soul? 27 For the Son of Man is going to come in his Father’s glory with his angels, and then he will reward each person according to what they have done.”

Do we love our sport more than we love Jesus? Is our pursuit for social acceptance more important to us than loving our neighbours as Christ has loved us?

When Jesus spoke about taking up a cross and giving up the world’s offerings, he wasn’t speaking rhetorically. Perhaps it is time for Christians in Australia to begin pondering his words and examine our own hearts and ambitions.

Update: Rugby Australia have announced that they are terminating their contract with Israel Folau (April 11th, 6:30pm)