The Age is right to publish Neil McMahon’s Qanda recap under ‘entertainment’, for it doesn’t belong under ‘news’ or anything resembling fair and factual reporting.

According to McMahon, Magda Szubanski is an angel, in contrast to  the rest of the panel who are presumably on the devil’s payroll.

I’m not having a go at Magda Szubanski and her contribution last night, but McMahon’s near superhuman selective hearing.

If you’ve only read McMahon’s offering in The Age, you’d be forgiven for thinking that last night’s QandA served up another staple diet of stupid Christians and thoughtful atheists, annoying anti-SSM campaigners and human heart beating advocates. I’m sure McMahon’s regulars will read his account with cheers, but for others who watched last night’s program, we are left wondering, through which smokey haze did he view Qanda?

QandA has gained a reputation for too often lacking finesse and nuance from its guests, but last night each panellist brought a healthy degree of intellectual argument touched with humility and empathy. 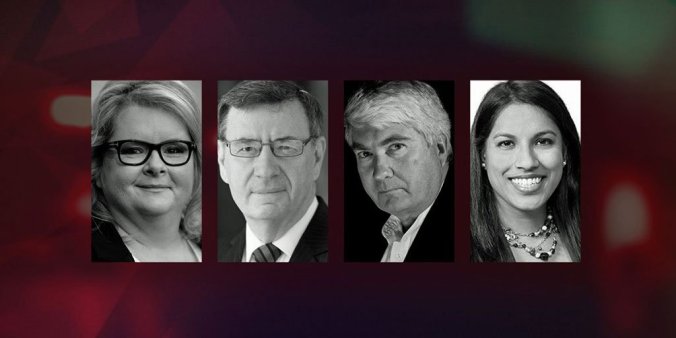 The entire program was dedicated to issue of same sex marriage, and important questions were asked, and all 4 panellists offered (for the most part) substantive comments and arguments, and yet McMahon fails to even acknowledge any of this.

McMahon latches onto one comment made by Karina Okotel, which was certainly less than convincing, but he concludes that she must be either lying or is at the very least untrustworthy in what she says,

“Okotel is a challenge in this debate: an all-smiling and apparent voice of reasonableness adept at speaking out of both sides of her mouth like the lawyer she is.”

Sure, she fluffed her answer, but it’s not as though there isn’t a clear and important response to this question (cf. https://murraycampbell.net/2017/09/02/fathers-day-telling/).

McMahon also completely ignores one important fact check from the episode, namely when Magda Szubanski repeated the old time myth of 10%. Alfred Kinsey’s now debunked study has nonetheless taken the status of undeniable truth for some in the community. After all, the temptation to inflate favourable numbers is understandable. According to most research, the real number of Australians who variously identify as LGBTI is closer to 2-4%. And according to the 2016 Census, 0.39% of Australians are living in a same sex relationship. Belonging to a small number doesn’t alter the humanity and worth of these Australians, but I would have thought that presenting misinformation isn’t helpful, no matter which side of a debate you are presenting.

Magda’s personal testimony is important and worth listening to. We (speaking to Christians here) do need to listen to such voices. It’s also worth hearing how she understands what Churches are saying about marriage. There are moments when Glenn Davies tries to correct some of her assumptions, without success it would seem, but the interaction does communicate something of the mishearing that is going on in our society.

If there was a “powerful” moment in last night’s program, surely it was Archbishop Glenn Davies stating that should holding Jesus’ view of marriage be declared unfit in Australians society, he would be prepared to go to jail. He would accept the democratic processes of our nation, but is not prepared to change his convictions even in face of imprisonment. But not even worthy of a footnote for McMahon.

Perhaps someone needs to give Neil McMahon their hearing aid, but then again, I’m sure he knows what he’s doing. Photoshopping reality is sadly a far to common tool of the trade in journalism today. Journos from all sides are guilty of doing this as they win the applause of their facebook groupies. Let’s be honest, this is not only a journalist problem, but we see it among our politicians, and we even see it in ourselves. We may rightly object to the selectivity and agenda bogged journalism that’s muddying our media, but at the same time, we ought to ask the same about our own proclivities.

“The heart of the discerning acquires knowledge,
for the ears of the wise seek it out.” (Proverbs 18:15)

One thought on “A QandA Recap”