Over the course of the week I affirmed much of the ABC’s reporting into domestic violence, and made it clear that any and all abuse is wrong and not to be tolerated. Abuses in the home contravene the teaching of the Bible, and expressly transgresses the Bible’s teaching on marriage. I have made my views public, not only this week, but 2 years ago. 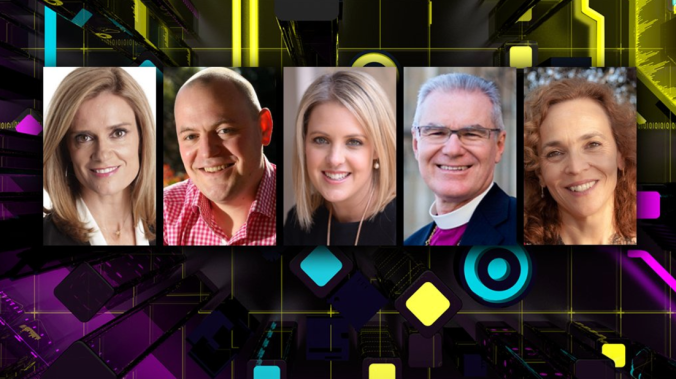 Unfortunately, ABC reporters are choosing to draw links and make strong insinuations where the threads are tenuous.

For instance Julia Baird has hit back at people who questioned the ABC’s reporting of statistics, suggesting that they were “quibbling” over data. At the same time, panelist Georgina Dent, insisted that there isn’t enough data. On the one hand, viewers were told that anyone asking questions about the research were ‘quibbling” and denying some of the assertions made by Baird and others, and then viewers were being told that the research should be even more damning than it is. This is problematic and confusing for so many reasons.

I do take issue with some comments being made this week. I have not appreciated the tone of some individuals, who instead of recognising that abuse can occur in a Church context, they simply went on the defensive. This is poor form, and it only aggravates the appalling wounds of women who have had courage to speak up this week.

Having said this, it appears somewhat disingenuous when the reporters suggests there is ‘quibbling’ of data. Let’s be clear, the ABC report relies on particular research, and it has since come to light that the evidence does not support some of the connections that Baird and others are trying to establish. For example, one of the main arguments being made on the ABC is that ‘headship’ teaching plays a significant role in the abuse of women. The research however says that the men who are the least likely to abuse their wives are those who are active and regular members of conservative churches. There is though a connection between abuse and men who are sporadic attenders of conservative churches.

Those ‘quibblers’ were not doubting the veracity of the research, but the ABC’s presentation of the evidence. Viewers are left asking, should we accept the research or not?

One of the key researchers that the ABC’s report relies upon is the work of Professor W Bradford Wilcox. Over the weekend he has weighed in on the conversation with a series of tweets, in which he questions the way that the ABC has represented the findings from his studies. It certainly unusual for an academic to step in and comment on a journalistic article from a different country. 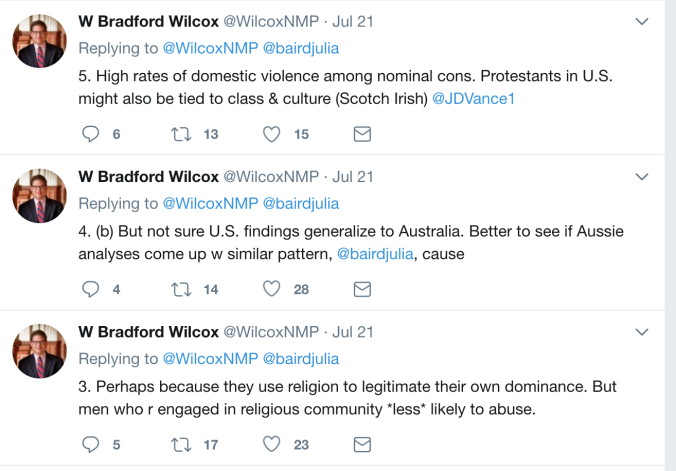 Secondly, in a follow up piece from last night’s The Drum, the views articulated by David Ould, are not fairly represented. It’s not that you misquote him, but that you didn’t quote the rest of what David said, and that you inserted these particular comments in a context that suggests his views are out of touch with what Christians really ought to believe. The reporter didn’t even properly explain what the Bible means by headship and submission, but presents it in such a way that readers are meant to think, ‘well, we all know how silly and wrong that view is’.

I whole-heartedly agree with this comment by Philip Freier, offered last night on The Drum,

”I know that these words are easy sometimes to say, but I think we should be truly regretful where we have failed and we haven’t listened to people, or understood the depth of their suffering, or the kind of situation that they are being urged to go back into.”

However, the Melbourne Archbishop also made this astonishing remark in which he, as a Christian leader, denounced the very own Scriptures he is ordained to uphold,

“I don’t find there is an essential reading of the Bible that teaches me that I must believe in the headship of men. I read the Bible and see that it talks more about the mutuality of people and their love towards each other.”

That’s a problem, because the Bible does teach a view of headship, and this view is one where the husband leads in love like Christ and lays down his life for his wife. Surely, the Archbishop isn’t asking husbands to ignore this biblical model? Not only that, his comment speaks against the very research that the ABC originally relied upon, that churches teaching and practicing Ephesians 5:22-31 have the male members who are LEAST likely to abuse their wives.

ABC, you have highlighted an issue that requires open and rigorous conversation. Almost every Christian leader I know is receiving this report with sober judgment and eagerness to do better when it comes to caring for abuse victims and dealing with perpetrators. I am concerned however, that this important report is mixed with at times poor journalism, and by doing so you will ultimately distract us from the actual issue that needs deliberation and action. The last thing we want is unhelpful journalism clouding the important stories being told by women about abuse, and from churches learning how to do better in the future.

One thought on “ABC, Domestic Violence, and Churches”