During a recent visit to the United States I managed to get a seat at the MET in New York for a performance of Mozart’s Don Giovanni.  In case you’re unfamiliar with the MET, the Metropolitan Opera is one of the most famous opera companies in the world, and conducting the performance was Placido Domingo, one of the finest classical musicians of the past 50 years. One reviewer wrote that this particular cast was one of the best ever assembled for a performance of Don Giovanni. On top of all that, no one has ever composed more exquisite and sonorous music than Wolfgang Amadeus Mozart.

Leaving aside the fact the Opera singers have the acting talent of an Australian soap opera, the music did not disappoint. There were a few stylistic and technical quibbles, but none to write home about. This was a rare opportunity to hear one the great musicians lead a superb cast in singing some of most sublime music ever heard on earth.

A few days later I was in Washington DC, and it was during this stay in DC that I heard music that made the Metropolitan Opera almost sound trifle. I spent 3 weeks hiding away in an apartment on Capitol Hill, working on a writing project. I occasionally slipped outside to buy food and to visit an art gallery or museum, and folk at Capitol Hill Baptist Church (CHBC) were kind and generous, and constantly inviting me to various church events throughout the week (an offer very hard to refuse!). On Sundays though I wanted to be with God’s people, and at Capitol Hill Baptist everyone spends most of the day together; it was a great joy and time of personal refreshment. 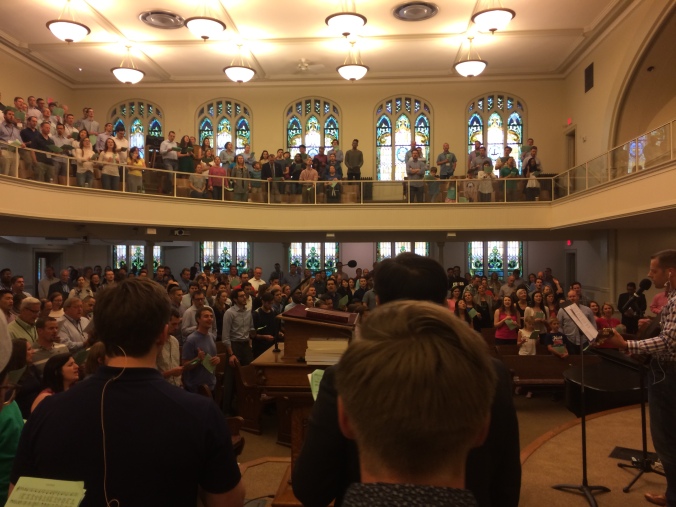 They love to sing at CHBC, as many as 10 hymns in the morning service and several more during the evening service. As someone who was once a professional musician, and once given an invitation to sing with the Melbourne Symphony, I have a particularly high view of what can and ought to be with music, and yet I can say that at over my time at CHBC I have rarely heard musical sounds that have given me more joy and encouragement, such that 10 hymns was not enough; a 1000 voices singing to God and each other with heart felt joy and delight.

The musical accompaniment was simple and bare –  an acoustic guitar and piano, and with 2-3 vocalists who were mic’d but only just enough so that they could lead the congregation through any unfamiliar passages and to keep time. The music is deliberately restrained, in order to elevate the role of the congregation sing, and hearing the people sing only encourages everyone to sing more.

I am not suggesting that this is how other churches should orchestrate music for church; I appreciate other genres of music in church and I have been part of congregations where the musical style is more contemporary, scored for a more full band, and musically more garnished, like a Mozart recitativo; such playing can encourage congregations to sing and be heard. However, in practice, the band and the way music is led from the front can inhibit and detract from congregational singing. Louder music isn’t always better. More professional music doesn’t equal improvement. More energetic (and charismatic) music leaders isn’t evidence of more godly or ‘successful’ music ministry. Not that such things are necessarily wrong, and I am proposing a false dichotomy between faithful music and professionalism, or congregational music and contemporary music, but if we cannot hear each other singing to praise God and to encourage each other with the truths of God, perhaps we should reconsider how we are doing music in church.

More important than how the music was arranged, it was clear that people believed what they were singing, and it was this belief in the words being sung that spawned such wonderful singing. Choose songs with superficial or bland lyrics, and we shouldn’t be surprised if the results follow suit. The words of every song were theologically rich and deep, and Gospel-centred, and chosen with care in order to assist the congregation prepare for and respond to God’s word. Unlike most churches today, there is no screen up front displaying the lyrics. Instead, everyone is given copies of the words and music in the bulletin on the way into church. Perhaps because I’m not used to paper anymore or maybe there is some didactic phenomena that I’m unaware of, but I found that in reading the word in front of me I was considering their meaning more carefully than when I follow words projected on a white screen.

The reason for sharing this experience is mostly because I loved the CHBC’s singing so much, and we should share stories and experiences that have encouraged us. At a time when so many negative and troubling news stories are coming out of Washington DC and Capitol Hill, just around the corner, in view of that famous dome, is a 1000 people, mostly 25 years old, whose voices are reaching heaven.

How are we encouraging our congregations to sing, not the band but the people to sing and be heard and encouraging one another with the truths of God and his Gospel?

“Let the message of Christ dwell among you richly as you teach and admonish one another with all wisdom through psalms, hymns, and songs from the Spirit, singing to God with gratitude in your hearts.” (Colossians 3:16)

Matthew Merker is one of the Pastoral Assistants at CHBC and over the weeks we sang one of his hymns, ‘He will hold me fast’. I’m looking forward to introducing it to Mentone Baptist in the near future:

“When I fear my faith will fail

When the tempter would prevail

I could never keep my hold

For my love is often cold

He must hold me fast

For my Savior loves me so

Those He saves are His delight

Precious in His holy sight

He’ll not let my soul be lost

His promises shall last

Bought by Him at such a cost

For my life He bled and died

Justice has been satisfied

Raised with Him to endless life

Till our faith is turned to sight

When he comes at last

3 thoughts on “2 Musical Experiences from the USA”