“All along the answer was staring us in the face.”

BREAKING NEWS: We are thankful to God for his grace and grateful to those who voted and defeated the ‘inherent requirement’ legislation.

Should this amendment to the ‘Equal Opportunity Act’ have been adopted, all religious organisations in Victoria, including churches, would have lost their freedom to employ people based on the beliefs and practices of the organisation. A tribunal would have been appointed by the Government, establishing a theological framework for all religious groups, and this same body would determine whether potential employees would be ‘inherently required’ to follow the convictions of any particular religious organisation.

In essence, the legislation would have redefined the role of Government in religious matters, giving it pseudo-episcopalian oversight.

A liberal democracy necessarily provides and protects an environment for society whereby associations have freedom to employ persons who’s convictions and character align with that organisation. In spite of the Andrews Government’s intent to remove this freedom from churches and religious schools, the Parliament has determined otherwise, at least for this point in time.

Today, we witnessed the Victorian Parliament putting on the brakes, and in a small way, slowing down a movement that is intent on eliminating Christian beliefs from society. After a series of anti-Christian policies that have come into effect over the past 2 years, we should be thankful for today’s decision, which means that the State of Victoria has retained an important aspect of religious freedom.

As we express gratitude, I trust though that people will refrain from pontificating, and from presuming that this decision will in some way advance Christian faith in Victoria. The reason is simple, the Gospel doesn’t advance through Parliamentary processes but only through the proclamation of the Gospel of Jesus Christ. Don’t get me wrong, it is a good thing that the legislation was defeated, but we mustn’t over-state the argument. 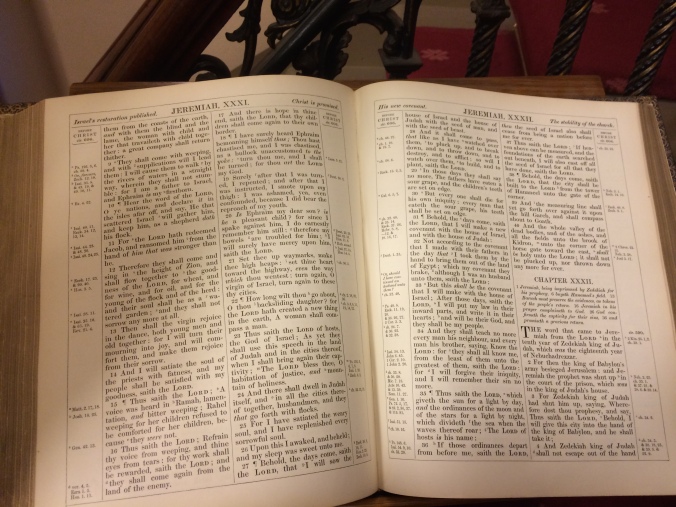 Rather than focusing on the ‘inherent requirement’ legislation, I wish to take the opportunity to speak of a little known fact about our Parliament building. Positioned in the middle of the Victorian Parliament building, inside the library, is a large Bible, opened and sitting on a wooden stand. It is not hidden in a corner or shelved along a row of books, but stands alone at the centre of the library, conspicuous as a light post.  Despite its prominence though, one wonders how often people stop to notice let alone read this copy of God’s word. One wonders if people consider this Holy book anything more than an item of historic curiosity.

I have walked passed this Bible on numerous occasions, and  have noted that it is always opened to the same passage, Jeremiah chapter 31. I don’t know the story behind choosing this particular portion of Scripture, and whether it was chosen carefully or just opened randomly. Either way, it is a fitting page for the seat of Victorian political power.

The book of Jeremiah was written in the 6th Century BC, at the time of the Babylonian invasion and of Jerusalem’s destruction.  The book details the ministry of Jeremiah the prophet, who expounded words from God that offered explanation of the nation’s then predicament. It was a time when society had turned its back on the God of the Bible, and instead chose to propagate and trust in ‘progressive’ political and religious thought. Not all Biblical thought was silenced, aspects were retained although heavily redacted and reinterpreted in ‘new’ ways.

The nation’s leaders, both political and religious, in ways that may remind one of Neville Chamberlain, spoke of a message of peace,

“From the least to the greatest,

all are greedy for gain;

They dress the wound of my people

as though it were not serious.

when there is no peace.

Are they ashamed of their detestable conduct?

No, they have no shame at all;

they do not even know how to blush.

So they will fall among the fallen;

they will be brought down when I punish them,”

The book of Jeremiah contains many bleak messages, and with good reason, but it is not without hope. Jeremiah ch.31 gives a portrait for a new beginning, a Divine promise of hope to those without hope. What is especially staggering about the message is that it is not written for ‘good’ people who are being beaten down by an oppression regime, but it is written for those who were doing the beating. To a disinterested and at times vitriolic people, God speaks a message forgiveness and newness, one that reaches to a level of humanity that no human law and politics can reach, the human heart.

31 “The days are coming,” declares the Lord,

“when I will make a new covenant

with the people of Israel

and with the people of Judah.

I made with their ancestors

when I took them by the hand

to lead them out of Egypt,

because they broke my covenant,

though I was a husband to them,”

after that time,” declares the Lord.

“I will put my law in their minds

and write it on their hearts.

I will be their God,

and they will be my people.

34 No longer will they teach their neighbor,

or say to one another, ‘Know the Lord,’

because they will all know me,

from the least of them to the greatest,”

“For I will forgive their wickedness

and will remember their sins no more.”

35 This is what the Lord says,

he who appoints the sun

to shine by day,

who decrees the moon and stars

to shine by night,

who stirs up the sea

so that its waves roar—

the Lord Almighty is his name:

36 “Only if these decrees vanish from my sight,”

“will Israel ever cease

being a nation before me.”

37 This is what the Lord says:

“Only if the heavens above can be measured

and the foundations of the earth below be searched out

will I reject all the descendants of Israel

because of all they have done,”

It is quite extraordinary and wonderful that at the centre of Victoria’s State legislative power is a reminder of ultimate hope. The answer to our deepest struggles and concerns lays not with Government policy and lawmaking, not in a ground swell of public opinion, or in the strident voices of columnists, but in an ancient promise given by God, God who kept his word by sending his only Son into the world.

The reality is, in different ways our political and ideological preferences can blind us from the glory of Jeremiah ch.31, whether we define ourselves as progressive or conservative, green, red or blue. No matter where people align themselves on these spectrums Jeremiah 31 gives a Divine word that counters and surprises. God is not frustrated by or restrained by any socio-political movement, and neither is he defined by it.

I would encourage all who visit our Parliamentary library, don’t walk past the Bible. Why not pause and read, and ponder at the possibility of its promises being true?