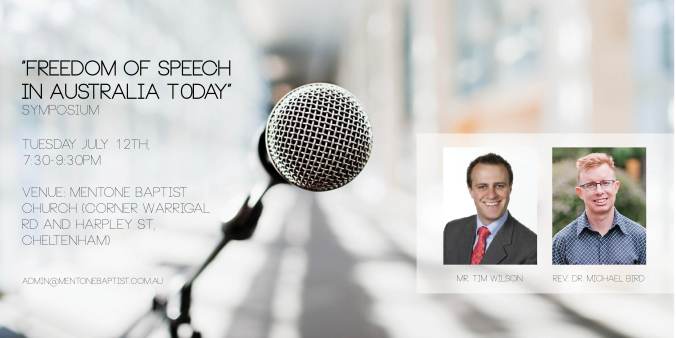 ‘Freedom of Speech’ is a significant social and political issue in Australia. The topic is being debated by the major parties in the current Federal election, and is an important issue for all Australians.

Mr Tim Wilson is the Liberal candidate for the Division of Goldstein. He was a public policy analyst and a commentator who was the Australian Human Rights Commissioner from 2014 until his resignation in 2016.

Dr Michael Bird is a lecturer of theology at Ridley College. He is one of Australia’s most distinguished theologians, having written over 20 books and speaking at conferences across Australia, the UK, and USA.

Both speakers have offered important contributions to this topic of ‘Freedom of Speech’, and it is a privilege to have them share the platform for this symposium.

The evening will consist of an address by each speaker, an opportunity for them to reply to the other’s presentation, and there will be a time for question and answer from the floor.

Refreshments will be served at the conclusion of the evening

Click on the graphic or here to book seats