“Better a poor but wise youth than an old but foolish king who no longer knows how to heed a warning”. (Ecclesiastes 4:13)

“Do not answer a fool according to his folly, or you yourself will be just like him.” (Proverbs 26:14)

If President Trump acted with hubris and foolishness yesterday by standing in front of a church building and holding a Bible in his right hand, then someone should have told Nancy Pelosi not to repeat the mistake.

Nancy Pelosi is the serving Speaker of the United States House of Representative. She has responded to President Trump’s awful photo op by offering one of her own. During a press conference at the Capitol Building today, Nancy Pelosi held onto a Bible and spoke to the media. She had learned one lesson of what not to do from President Trump, she opened the Bible and read out loud what can be described as a loose paraphrase from Ecclesiastes ch.3

She might have continued and read what follows in that chapter,

And I saw something else under the sun:

I said to myself,

“God will bring into judgment
both the righteous and the wicked,
for there will be a time for every activity,
a time to judge every deed.” 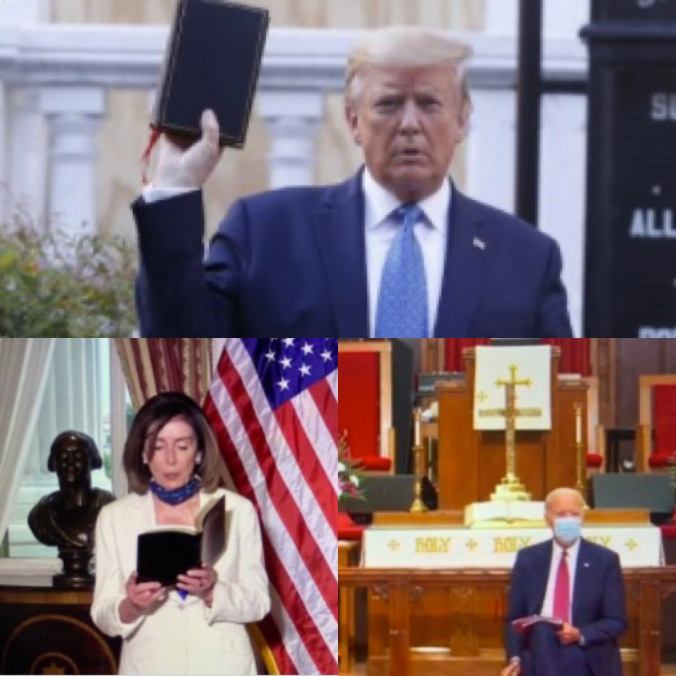 Nancy ‘the Bible teacher’ Pelosi may have offered at least a conciliatory tone but the grandstanding is nonetheless equally egregious. It was a silly game of oneupmanship, made using the word of God as the instrument of choice.

The fact that she opened the Bible and read a few verses holds her to a higher standard of responsibility. As the Scriptures says,

“Do not merely listen to the word, and so deceive yourselves. Do what it says. Anyone who listens to the word but does not do what it says is like someone who looks at his face in a mirror” (James 1:22-23)

I’m sure this press briefing will be received positively by many. The media hasn’t treated it with the same kind of disdain that has been expressed over President Trump’s efforts yesterday. Let the reader understand, the media isn’t interested in the word of God being rightly handled, and neither are partisan hacks. As followers of the Lord Jesus Christ, we ought to be.

“Do your best to present yourself to God as one approved, a worker who does not need to be ashamed and who correctly handles the word of truth.” (2 Timothy 2:15)

These words are not written for politicians, they are directed to pastors, and they are also applicable to Christians in general. Christians should not be fooled by either photo op. Mocking God is not a wise course of action, and we don’t want to find ourselves excusing or supporting these behaviours.  Pretending to hold Scripture in high regard while openly legislating against its teachings is known in the Bible as ‘hypocrisy’.

As a result of criticising President Trump yesterday, I received some pushback, which is unsurprising in our fractious world. As Christians we must understand that the standard for Christian faith is not allegiance to any given political party, it is the Lordship of Jesus Christ. This is a real danger for Christians living in a polarised and politically partisan society. Of course we all hold political preferences, and I appreciate the real ideological difference between Republicans and Democrats; these things matter,  but they should never supersede our allegiance to Christ.

Criticising the wrongful actions of one political leader does not mean an endorsement of another; that is a logical fallacy. If we cannot hold people in public office to account even when they represent our political party,  and call out their abuse of God’s word, then perhaps we need to ask ourselves what kind of Christianity we are believing.

The footage of President Trump was poor and should not be defended by Christians. There was no calling the nation to open this word and to live by it. There was no humility. Today’s footage of Nancy Pelosi similarly speaks to political expediency.

Caesar is not infallible and neither is Brutus. I would love to see both Pelosi and Trump reading and meditating upon this precious word that truly gives peace, life, and hope to all who receive it. It is truly insane when the very word of life is being held in the hand and yet rejected. I encourage my American brothers and sister in Christ to pray for their leaders, as the Scriptures urge us to.

Let me finish with the words of a pastoral colleague who is serving in a church in Virginia. He summarises the issue well:

“Beware of those who use God’s Name for political gain.

Jesus is neither a Republican or Democrat.

His Kingdom is not of this world.

In the past 24 hours, 3 leading political figures have presented themselves as representing Jesus without giving evidence of knowing Him.

Our church would welcome each as guests & we’d share the Gospel w/ them but I’m grieved when people confuse people about what it means to know Jesus.

To be clear: Christians can vote for candidates who are not Christian. We often will.

But beware of forming your opinion of Jesus based on the lives of those who use Jesus to further their own anti-Jesus ambitions.”