The Prime Minister of Australia prayed for the nation and asked other Australians to join him.  There was a rare muted response by some of the usual religious critics, quite possibly due to an awareness that this is not the time to knock our national leaders or God for that matter. But as predictable as a toddler throwing their late afternoon tantrum, other secularists couldn’t control their outrage at Scott Morrison. 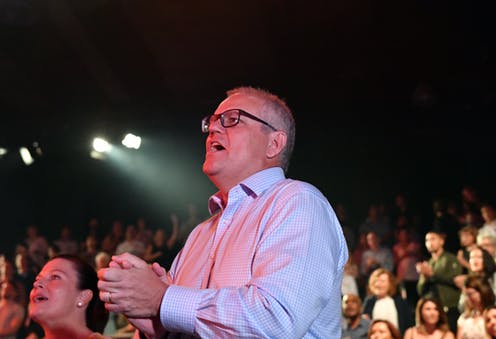 Arguments against the Prime Minister praying in public are varied, from the ridiculous to the illogical and to the popular but erroneous.

For example, one of the first complaints I saw on social media took aim at  Scott Morrison for using the Prime Minister’s office and Government time to broadcast this prayer. Seriously? Give the man a break. He’s probably working 100 hours a week at the moment, sleeping little, and barely seeing his own family. Are we really going to take issue with him for taking a few minutes to pray?

One complaint, that might at first seem to carry some weight, is the perceived undermining of cultural pluralism. For example, Jane Caro tweeted,

“Praying is fine, dedicating Australia – a secular, pluralistic democracy – to his god is not. It’s not his country to dedicate to anyone, and 30% of us have no faith & many that do – worship a different god from his. That was my issue.”

The problem with Caro’s argument is that it falls flat no matter what the Prime Minister believes. If he was a Hindu and prayed to one of the thousands of Hindu gods, he would be out of sync with the majority of Australians. If the PM was an atheist and in principle refused to prayer, he would be out of step with the many millions of Australians who are praying during this crisis.

The Prime Minister praying for our nation doesn’t undermine our pluralism,  it is a shining example of it. Unlike Communist States where religion is banned and unlike religious totalitarian States like Iran, our political representatives have the freedom to speak of their deep-seated beliefs about God and the world. We can agree or disagree. We can support them or not. We are free to join with them or not.

Jane Caro is known for wanting to remove religion from the public square altogether. She is okay with religion being practised in private but not in public. This, however, is neither secularism or pluralism, it is, as a friend suggested last night, fundamentalism. This is the state of play in countries like North Korea and China. Do we really want Australia following their lead?

A truly secular society can never be a religion-free zone. That is a fictitious position that can only exist in the theoretical world and is posited by persons who are themselves reacting against set religious thinking (usually Christian theism). Classic secularism (of which Australia is an example) is designed to provide a civil public life which encourages the discussion of life’s big questions without control by any single ideologue. Secularism provides a framework for social pluralism, and pluralism shouldn’t drive religion underground but encourage honest adherence.

But what about s.116? This section of the Constitution has been floated as a directive against the Prime Minister’s action. For example, this tweet,

“s.116 of the constitution states we have no official religion. Previous PMs have been more sensitive to our diverse polis. Using the PM’s office to dedicate the nation to his particular denominational god is poor form.”

This clause does not preclude people of faith from holding public office or force them to keep their convictions at home while they work. S.116 explains that Australia will not be governed by any single religion, as though Australia should become an agency of the Anglican or Roman Catholic Church. It should be noted that the framers of the Australian constitution used Judeo-Christian principles to establish our secular nation. By secular they did not mean banning religious thought from politics and public discourse. Let’s not pretend that atheism equals moral and philosophical neutrality or superiority. Some of the most extreme and inhumane regimes in the world today are those controlled by atheistic political systems.

True secularism means the freedom to speak regardless of one’s religious affiliation or lack thereof. What would violate the Constitution are demands that politicians keep their religious beliefs away from the public square.

As Australians begins a third week of self-isolating, we have already learned that Governments are unsure what to do. Plans are changing almost daily. Medical experts are offering the best advice they can, while still not knowing how COVID-19 will play out in coming days and months. Economists are grappling with the short term survival requirements and theorising about the long term damage that will be made to the economy. It is natural and necessary for us to lift our eyes and to inquire of God and to ask God for his grace and mercy. I for one am thankful that such a God exists and that through Jesus we are invited to call upon him in times of need.

let my cry for help come to you.

Do not hide your face from me

when I am in distress.

Turn your ear to me;

when I call, answer me quickly.”

9 thoughts on “Mocking prayer or turning to prayer?”