As Professor John Newnham was awarded Senior Australian of the Year for 2020, the irony may have missed us at first.

Professor Newnham has dedicated his professional life to saving the lives of babies. He is an obstetrician who has given years to researching preterm birth, with the purpose of finding ways to prevent harmful early birth.

According to the University of Western Australia website, Professor Newnham’s,

“enduring research and clinical passion has been to unravel the mysteries of life before birth, how health and disease throughout our lifespan may result from events while we are a foetus, and how common illnesses and disabilities can be prevented by strategies during pregnancy.

In 1989, Professor Newnham pioneered the Raine Study, which involved recruiting 2900 unborn babies at 18 weeks of pregnancy and then following their health, and that of their family, for life. This was the world’s first pregnancy-focused lifetime cohort study and remains one of the most successful medical research studies to have been conducted in Australia.”

Professor Newnham’s drive to care for Australia’s youngest is laudable and deserving of national attention. 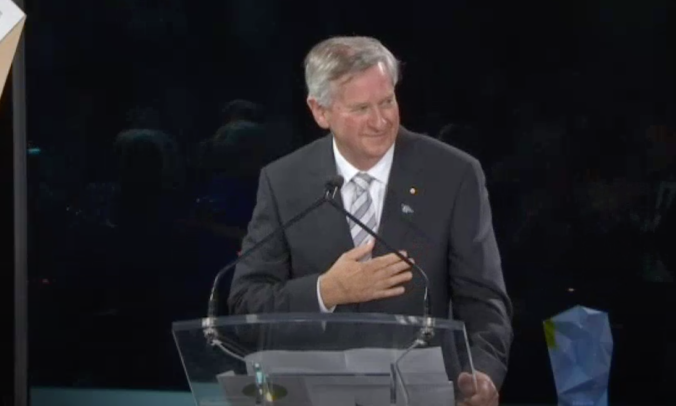 Here is a quotation from Professor Newnham from the UWA webpage, that summarises his aim,

“As a result of modern obstetric and newborn care, many children now survive preterm birth but for others, there may be lifelong disability. What drives me to complete my work is the desire to see an increase in the number of healthy babies born each day, because life before birth means something.”

Amen! Yes, it does. “life before birth means something”. Now, I don’t know the man nor what believes about the big questions of life, God and the world, but I admire someone whose career is devoted to giving babies a better chance of life.

By now, I’m sure you will have also noticed the irony. Let the nation celebrate a man who is saving the lives of unborn children! In contrast,  over the same timeframe, Australia has witnessed the ‘progressive’ juggernaut blast through abortion laws in many of the nation’s States. Last year the NSW Parliament legalised abortion. In 2018, QLD gave license for the unborn to be killed. In Victoria, abortion is legal even up to the point of birth. When these legislations were presented to the Parliaments, it’s not as though Australians spoke of this terrible act with reticence and a heavy heart. No, there were loud and happy cries of liberation.

“The structure of the program has been built. The lead persons in each state and territory are in place.”

“What we need to do now is to provide the support needed for national success. And that includes financial support.

“It is now time for prevention of pre-term birth to become a national priority for Australia.”

That final sentence ought to create a wave of gasps around the country, not because there’s anything wrong with it, but because of its significance should we follow its natural logic. I doubt whether any journalist will note the irreconcilable clash of ideas here. Of course, the Professor isn’t talking about abortion as such. This approach to human life does, however, contradict the attitude and philosophic reasoning toward the unborn upon which abortion activists depend.

A nation that celebrates John Newnham on the one hand and celebrates abortion on the other, is at best confused and unaware of the moral dilemma that this dichotomy presents. At worst, Australians are machiavellian pragmatists, who value human life, not because of its inherent worth but because of the value I give it. Imagine living in a world where a human life only counts because I say so. Imagine living in a society where the young will live or be killed depending on what a parent decides?

Can we really say that the life of one child means less than the life of another? Specifically, Professor Newnham’s work relates to lowering the risks of children suffering illnesses and disabilities as a result of early birth. This approach sits in sharp contrast to what we are seeing in nations like Iceland whose approach is to abort those children who may suffer from a disability (an approach that is also employed in Australia). Does a child’s right to live diminish because they may suffer an illness or disability?

Today, Australians are praising a doctor who is striving to protect the health and life of unborn children. Tomorrow, hundreds of Aussie women will consider aborting their own unborn child.  To them, I say, there is a better path. It may be a difficult road but it is better, and there are organisations and people who are willing to help.

As Professor Newnham says, “life before birth means something”.

How can Aussies praise the saving of one child in the womb and praise the killing of another child in the womb? It does not make sense, rationally or morally. Sadly, I suspect that for many Aussies, we will put this dilemma in the too hard basket. Instead, we will live with the incongruity and hope our consciences never spring to life.  Let’s throw another snag on the BBQ and pretend she’ll be right. Let’s stand and sing again, “Australians all let us rejoice…Advance Australia Fair.”

Or perhaps the Psalmist was right all along,

“I praise you because I am fearfully and wonderfully made; your works are wonderful, I know that full well.” (Psalm 139:14)