While Pope Francis was visiting Ireland over the weekend, accusations have been raised by one of the Roman Catholic Church’s most senior Archbishops.

According to an explosive piece in NPR,

Given the gravity of the allegations being made by Archbishop Carlo Maria Viganò, it is inappropriate for other observers or me to offer an uninformed opinion on the particulars. It is however surely incumbent upon authorities to fully investigate this public letter. 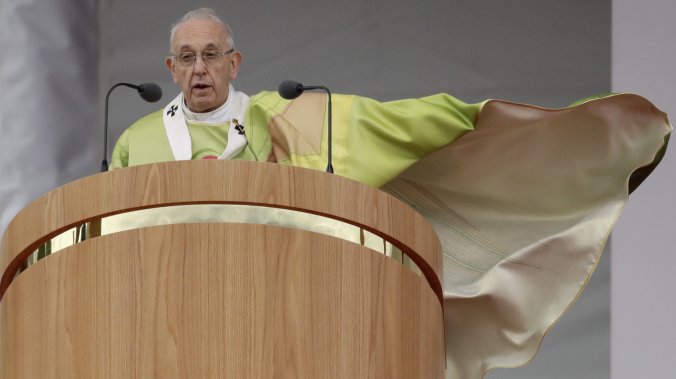 What I wish to do here is re-express my great concern and sorrow. 18 months I presented a series of matters relating to the report published by the Royal Commission into Institutional Responses to Child Sexual Abuse. At the time, the Australian media were uninterested in this perspective, but I believe it is important to repeat the message because the Australian public and Australian Christians need Church leaders to speak up. Thank God, there are Christian leaders speaking openly and unreservedly; Richard Condie (the Anglican Bishop of Tasmania) is one such example who immediately comes to mind. The pain and anger rightly runs deep, and Churches must face reality, that repentance must also be deep and enduring.

We can expect accounts and allegations of sexual abuse from within the Roman Catholic Church and coverups by clergy to come to light for many years to come. No doubt, the same will be true for many religious and nonreligious organisations.

When the Royal Commission released statistics relating to child sexual abuse in the Roman Catholic Church of Australia (February 2017), Australians were appalled and shocked, although sadly we were  unsurprised.

The Royal Commission disclosed that a survey conducted by the Australian Catholic Church found 4,500 alleged cases of child abuse within their organisations. This number reflects claims made between January 1, 1980 and February 28, 2015, and it also excludes cases that were not investigated.

Few significant organisations in the country have not discovered someone who has abused a child; my own Baptist denomination is not without known cases. Jesus warns us about the log in our own eye, and the Scriptures also call Church leaders not to treat gross sin lightly. We anticipate people will try to infiltrate all kinds of organisations to scope and prey on innocence; this is not to excuse due organisational diligence, but this world holds insidious individuals who will attempt to circumvent the highest standards. Having said all that, this new data communicates what we perhaps already knew and that there is a major flaw in Roman Catholic attitudes, brought about in part by flawed theological belief and practice. While any instance of child abuse is repugnant, there is a difference between isolated cases of abuse and a culture of abuse.

7% of Catholic priests serving between 1950-2009 have been identified as alleged perpetrators. The current known number is 1,880 men. Among some Catholic organisations the percentage is considerably higher: 22% of ‘Christian Brothers’, and 40.4% of those belonging to the order of ‘the Brother of St John of God’ are known to be sex offenders.

The issue extends beyond the fact that priests have abused thousands of children, but that Catholic Dioceses (and other denominations) have also failed to adequately address allegations and the clergy in question.

This is a national catastrophe.

Abusing children is unacceptable, for any person belonging to any community group or society, and sadly it is occurring even now in many family homes across our suburbs and towns; it should not be. The Royal Commission has disclosed child abuse in schools, sporting clubs, Government organisations, and across religious groups. There is, however, something particularly evil about the presence of such sin among communities who profess Jesus Christ.

As a parent with three children, I can imagine what many Aussie parents are thinking about these revelations, and these thoughts are not cordial. There are feelings of disgust toward the perpetrators and toward ecclesial authorities who have repeatedly failed to investigate and protect. There are feelings of sorrow for those whose childhood was snatched from them.

As a Christian and as a Church minister, I am angered that men would betray children under their care and that they would so disdain the name of Jesus by their gross sin. It is beyond reprehensible.

“For certain people have crept in unnoticed who long ago were designated for this condemnation, ungodly people, who pervert the grace of our God into sensuality and deny our only Master and Lord, Jesus Christ.” (Jude 4)

As much as we may point out that these priestly behaviours are irreconcilable with authentic Christianity, for they certainly contravene the person and teaching of Jesus Christ in every way, and yet we must appreciate that this issue has understandably tainted peoples trust in Churches. I can also see how many Australians don’t differentiate between Roman Catholicism and Christian Churches, for there are correlations, but there are also stark differences, which pertain to deeply held theological views that are proving to be unbiblical and untenable, including Rome’s view of the priesthood and of the confessional.

Pope Francis last night offered a prayer on a tweet,

“I ask our Blessed Mother to intercede for the healing of the survivors of abuse and to confirm every member of our Christian family in the resolve never again to permit these situations to occur.”

While it would be presumptuous of me to question the Pope’s sincerity, this prayer will be as efficacious as praying to a man in a cape or Jack Dorsey himself. A better approach is surely to take Jesus’ view of repentance more seriously. Christians mustn’t give up being like Jesus, we need to become more like him. In the same short New Testament letter of Jude, where Christians are urged to look out for potential abusers in our churches, a few verses later we are also encouraged to “be merciful to those who doubt”.  This is not a time for defensiveness, but repentance, public repentance.