If you’ve ever felt sheepish, the reason may be more acute than you first thought!

Melbourne is in the middle of a world wide campaign to fight for the rights of animals*. I wasn’t aware of this fact until pictures of sheep started appearing on social media this morning, but apparently “Melbourne is becoming known as one of the world’s most vegan-friendly cities”. Leaving aside what this must mean for another of our most beloved titles, ‘Australia’s food capital’, what are we to make of these posters?

After doing a little research I discovered that I missed out on ‘World Vegan Day’, last November. According to organisers, the goal of World Vegan Day is,

“to promote and expand awareness of the ethical, compassionate, health and environmental benefits of a vegan diet and lifestyle to the general public.

We are an all-inclusive, non-judgemental family event that encourages all people of every age group, gender, race and religion to celebrate World Vegan Day. While it is a great day for all Vegans to celebrate the vegan lifestyle it is also a great opportunity to outreach to the wider non-vegan community and immerse them for a few hours in the vegan lifestyle.”

It all sounds rather nice and tame, until you stop for half a second and realise that ‘non-judgemental’ only counts so long as you accept their philosophy about animals and humans. Last month, dozens of vegan protesters stormed a Melbourne steak restaurant, waving posters and screaming at diners. 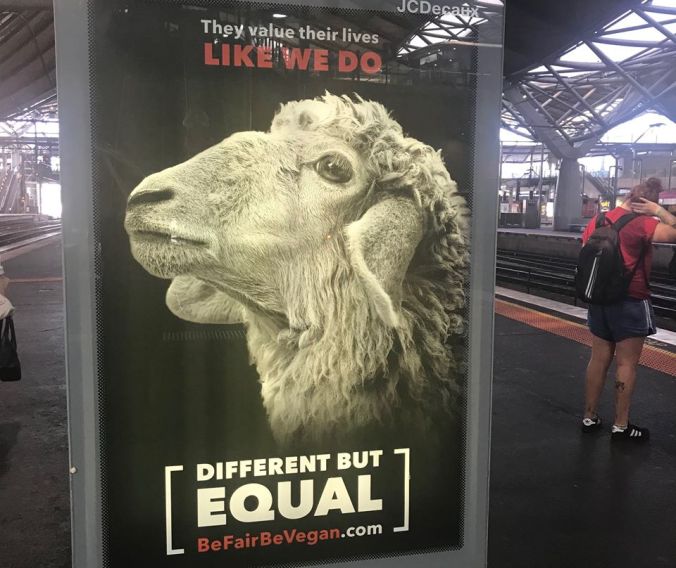 If the point is simply to make the public aware of certain cruel and unnecessary practices, fair enough. But no, they want us to believe that animals share the same rights as human beings.

Do we really believe that a sheep has the same value as a human being? Are you convinced that a person is ultimately no different to or better than an animal? And let’s not stop with sheep, after all are not all animals equal? What about cows, camels and man’s best friend?

It has become socially uncouth to speak up about the mass slaughter of unborn human beings. In my home State, the terminally ill are now only one train stop away from termination. The greatest sin of all is to suggest that there is any difference between the sexes. We are not only equal, we are all the same. Clearly, that must be true because women’s AFL is about to scrapped and instead female footballers will compete with the men in the draft. In fact we are now taking this pursuit to a whole new level, for society has committed itself to the unscientific and unkind endeavour of gender blurring. We can move between genders, and undergo hormone treatment to give the physical impression of change.

Perhaps the dream of Australia’s most infamous ethicist will come true, ‘imagine there’s no heaven or hell, no God, no marked difference between people and animals.’

In 2007, Peter Singer wrote a piece in the New York Times, where he discussed ethical questions surrounding  a severely disabled 9 year old girl by the name of Ashley. He wrote,

“Here’s where things get philosophically interesting. We are always ready to find dignity in human beings, including those whose mental age will never exceed that of an infant, but we don’t attribute dignity to dogs or cats, though they clearly operate at a more advanced mental level than human infants. Just making that comparison provokes outrage in some quarters. But why should dignity always go together with species membership, no matter what the characteristics of the individual may be?

What matters in Ashley’s life is that she should not suffer, and that she should be able to enjoy whatever she is capable of enjoying. Beyond that, she is precious not so much for what she is, but because her parents and siblings love her and care about her. Lofty talk about human dignity should not stand in the way of children like her getting the treatment that is best both for them and their families.”

Notice the comparison he makes? He suggests that the life of a dog or cat has more value and ‘dignity’ than a human being with limited cognitive faculties. Not only that, in true utilitarian style he denies Ashley’s intrinsic worth as a human being, suggesting that she has worth only insofar as she is loved by her family.

This post is not a rant against veganism as such. I don’t get it, and I have no plans to giving up milk, eggs, and especially steak. To be clear, the practice of not eating or using animal products is not inherently wrong. When it comes to some treatment of animals in our abattoirs, they probably have a valid point to make. However, the idea that animals and human beings are of equal worth, is vile and communicates how crazy the culture has become.

I suspect the vegan lifestyle is never going to catch up in mainstream society, but the atheistic utilitarianism of Peter Singer and others has already taken middle Australia captive. The vegan slogan is nothing more than the natural outworking of decades of denying the inherent imago dei.

According to the Bible, we do share one trait with sheep, “we all like sheep have gone astray”. We’ve broken down the fence and wandered off, and are trying to create a world without God and stubbornly refusing his good design.

I have some suggestions for a new poster at Melbourne’s train stations:

“Equal But Different: Dignity for men and women”

“Equality for the Unborn”

Does anyone think that any of these slogans would be permitted on platform 8 at Southern Cross Station?

*No vegans were hurt in the publication of this post