The Melbourne Cricket Ground (MCG) is one of the great sporting stadiums of the world. First built in 1853, it is the home of Australian Rules Football. For 6 months of the year, 10,000s of football fans descend onto the G each weekend, to watch their teams play. The MCG has also been the scene of many memorable Cricket Tests, where on Boxing Day, 90,000 Melbournians take their seats to watch 590 balls bowled to terrified or dumbfounded batsmen.

During the Second World War, thousands of American Marines and GIs camped under the stands. In 1956, Ron Clarke lit the Olympic cauldron at the top of MCG, during opening ceremony of the Melbourne Olympics Games.

Every Australian knows the MCG, and almost every Melbourne family has taken a seat to watch the cricket or footy. It has become a family tradition of ours, to enjoy Carlton beating Essendon on a winters day, and in the summer heat, to cheer on the Aussie cricket team. We still talk about the times when our eldest son was given the opportunity to train at the G (and ran out on the pitch when no one was looking!)

The Melbourne Cricket Ground is symbolic of Australians favourite past-time, sport. We idolise anything that involves running, and kicking or hitting a ball. It’s how we spend our weekends, playing and watching sport. 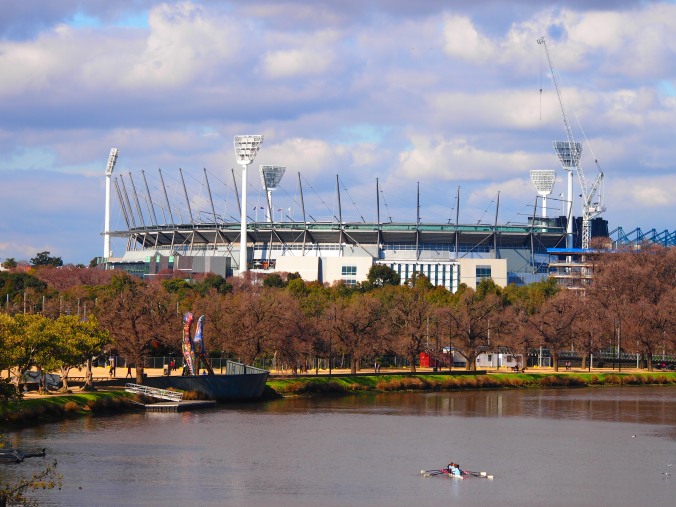 This temple of Melbourne once bore witness to a very different stage. There were no footballs or cricket bats present, no athletes running around, and no one paying for admission. Instead, 140,000 men and women crammed the stands and spilled onto that famous turf, to hear Billy Graham preach the Gospel of Jesus Christ.

The 1959, the Billy Graham crusade had already run several meetings at another stunning venue, the Myer Music Bowl. But because of the large crowds, it was decided to move the final crusade to the MCG. Even then, no one would have predicted how many people would come, and the mark it would leave on Melbourne’s history.

I love this surprising fact about my city: Melbourne who is so proud of its prosperity, Melbourne who worships sport, Melbourne who is clambering to make herself one of the world’s most progressive and secular cities. In our most loved place, the record highest attendance is for an evangelistic sermon.

Our MCG has witnessed many celebrated moments, but the one which has left a mark for eternity was that day in 1959, when  Billy Graham came and opened the Bible, and preached the good news of Jesus Christ. In the kindness of God, and perhaps with a degree of irony, God replaced the idols of Melbourne with the crucified and risen Lord Jesus Christ, and lives were transformed.

Melbourne in the 1950s could be described as conservative, and having a strong Christian culture. It was not however Christian. For hundreds of people that day though, Christian influenced habits became a living faith. Today, our society may still hold onto many strands of Christianity but it has long forgotten their significance, and with moral certainty we are one by one cutting these ties. Perhaps in His mercy and love, God might again reveal his grace and power in Melbourne. Not that we are looking for a repeat of a Billy Graham crusade, but rather we look to the one whom Billy Graham preached and lived.

One thought on “Billy Graham and Melbourne’s record”