The nature of unity and diversity within Christianity has captivated churches, denominations, and Christian organisations for centuries. Unity and diversity can at times seem like polar opposites, as though we must choose between them. They can however co-exist, and in the Gospel we find that they ought.

What does this unity/diversity paradox look like in a Christian Church? What does it mean to be united? How diverse should we be and diverse in what?

Navigating the waters of unity and diversity can be trickier than piloting a supertanker through Port Phillip Bay, and it’s made even harder if we ignore the navigation system that is provided for ships to follow. For that reason we must turn to the Bible and ask what does the Bible teach us about unity and diversity in the Christian Church? 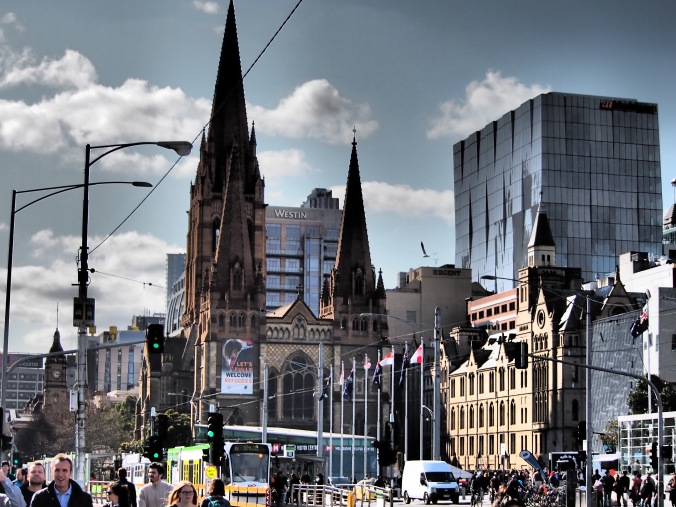 The Gospel of Jesus Christ is God’s chosen means to reconcile sinful human beings to God. The Gospel isn’t an indefinable feeling or idea, it is a message that has concrete meaning and significance. The Gospel is God’s good news about Jesus Christ, his atoning death on the cross and his resurrection from the dead. At the heart of this message is God’s gracious gift of justification that we receive through faith in Christ.

In Ephesians ch. 4, Paul stresses the importance of and joy of Christian unity. The focus is on life in the local church, but this teaching can extend beyond the parameters of the local gathering of believers. It is important not to conflate everything that is a church with what a Christian organisation is and does, or with what a denomination is and does. Denominations are not a church, rather they are a group of churches (and with other organisations thrown into the mix). Christian denominations are organisations which exist to serve Churches of shared theological convictions. They may provide a network of Gospel relationships, an institution for training clergy, mission training and strategy, and organisations that help with social care. In denominations such as Anglicanism, there also exists formal hierarchical oversight, with bishops appointed to shepherd groups of churches. While they are not a church, the theological principles given by Paul are useful and wise. After all, what should be the unifying factor for denominations if not the Gospel of Jesus Christ?

Paul outlines that we don’t ultimately establish Christian unity, for that work belongs to Christ through his shed blood on the cross, and by the Spirit of God. He unites us firstly to God, and through him to one another (Eph 2:11-22). At the same time though, Paul insists that we need to work hard at maintaining this unity and growing this unity. Growing unity is expressed through works of service, love, speaking the truth in love, and Christian maturity.

There is sometimes a false dichotomy introduced between relationship and doctrine, as though unity is found by being in relationship with one another, as opposed to doctrine which has propensity to divide. The unity that God is on about is a commitment grounded in common assent to the Gospel; it is both relational and doctrinal (i.e. 1 Tim 4:16). Returning to Ephesians ch4, we learn that there two ingredients necessary for authentic unity to grow and mature: love and truth (both are found in Christ). Such dynamic growth stems from the ministry of the word. As the word of God rules the Church, her people are equipped for works of service, and the outcome is maturity, strengthening, speaking the truth in love, and growth. The Apostle even warns that when truth is absent or hidden or misused, the effect upon the church is devastating,

“Then we will no longer be infants, tossed back and forth by the waves, and blown here and there by every wind of teaching and by the cunning and craftiness of people in their deceitful scheming” (4:14).

Ephesians 2:11-22 beautifully describes the power of the Gospel to break down the barrier between Jew and Gentile; by the shed blood of Christ the two people become one.

“For he himself is our peace, who has made the two groups one and has destroyed the barrier, the dividing wall of hostility, 15 by setting aside in his flesh the law with its commands and regulations. His purpose was to create in himself one new humanity out of the two, thus making peace, 16 and in one body to reconcile both of them to God through the cross, by which he put to death their hostility. 17 He came and preached peace to you who were far away and peace to those who were near. 18 For through him we both have access to the Father by one Spirit.

19 Consequently, you are no longer foreigners and strangers, but fellow citizens with God’s people and also members of his household, 20 built on the foundation of the apostles and prophets, with Christ Jesus himself as the chief cornerstone. 21 In him the whole building is joined together and rises to become a holy temple in the Lord. 22 And in him you too are being built together to become a dwelling in which God lives by his Spirit.” (Eph 2:14-22)

Gospel unity is not uniformity. There is a type of diversity that is to be welcomed and even desired. In the Gospel God draws together men & women, young and old, people from every race and language, and from different cultures. Such demographic diversity reflects God’s purposes in the world.

Within the local church there is also a diversity of gifts given by God, and there are many different opportunities to serve the body and to love the local community.

It is also the case that no single church can reach every person from every culture and place. Thus a diversity of churches in different places and with various cultural expressions is natural and laudable.

i. The closer the working relationship, the more important it is to be on the same page theologically. This is one of the reasons why we have denominations. Interestingly though, the unifying factor for denominations is often their ecclesiology, rather than other areas of theology. Given the nature of denominations, it makes sense that there is a shared view of church, however is this enough to keep a Christian denomination growing in unity?

ii. A different standard exists for leaders than for congregation members (cf 1 & 2 Timothy, Titus 1:5-16; James 3:1). While new Christians have an ignited love for God, it is normal for them to have many questions and to lack discernment over many theological matters (cf.1 Timothy 3:6). Leaders, however, are rightly expected to hold deeply to the faith and to be disciplined when they err.

iv. The Bible does not include issues of sexuality among those disputable matters:

“We know that the law is good if one uses it properly. We also know that  the law is made not for the righteous but for lawbreakers and rebels, the ungodly and sinful, the unholy and irreligious, for those who kill their fathers or mothers, for murderers, for the sexually immoral, for those practicing homosexuality, for slave traders and liars and perjurers— and for whatever else is contrary  to the sound doctrine that conforms to the gospel concerning the glory of the blessed God, which he entrusted to me.” (1 Timothy 1:8-11)

“Or do you not know that wrongdoers will not inherit the kingdom of God? Do not be deceived: Neither the sexually immoral nor idolaters nor adulterers nor men who have sex with men 10 nor thieves nor the greedy nor drunkards nor slanderers nor swindlers will inherit the kingdom of God. 11 And that is what some of you were. But you were washed, you were sanctified, you were justified in the name of the Lord Jesus Christ and by the Spirit of our God.” (1 Corinthians 6:9-11)

These two passages are important to this discussion for several reasons including, sound doctrine is integrally connected to the Gospel, and sinful acts contradict sound doctrine. If the Bible teaches that a particular act is sinful and keeps people from God’s Kingdom and is a reason for God to reveal his wrath, accepting diverse opinion on that matter would be to deny unity in the Gospel.

When it comes to applying this tension to actual relationships we should be aware of our own natural preferences, which may be to emphasise unity over diversity or diversity over unity. We all have our blind spots, which is one reason why it’s so important to together humbly return again and again and again to God’s word for correction and direction.

In recent days there have been a series of public letters being circulated by various Australian Bishops, and they are wrestling with this issue of unity and diversity. It is not only the Anglican Communion who are struggling with this, for there are many Christian denominations, both globally and locally, who are trying to come to terms with significant theological and moral disputes. How we respond depends in part on what the issue is, and the nature of the relationship with those among whom there is (dis)agreement.

For fours years my wife and I lived in the now capital of Aussie ‘no religion’, Erskineville, in Sydney. Our home was an old terrace, in one of the famous narrow one way streets that navigate the suburb. We loved where we lived, and spent four very happy years there. Toward the end of our time however, we discovered termites eating away at the walls and underneath the house. The first sign was a gaping hole appearing at the bottom of the staircase. A number of options were apparent to us, but the one we quickly discounted was doing nothing and leave things as they were.

What happens when there’s a crack in the building? What if you notice a friend’s house being eaten away by termites? If you are in a position to assist, don’t you help? Don’t you ask, what can we do to assist?

In Ezekiel 13:9-11, God speaks of a “flimsy wall” that Israel’s leaders were building. Upon completion they would whitewash the wall in an attempt to hide its poor construction. We can dress it up with colourful paint, and Banksy can make a night time appearance and create a new work of art. But the rain will eventually wash off the paint and the wind will tear down the wall.

None of this is new; there have always been white ants undermining churches and Gospel unity. The one thing we cannot afford to do is throw a new coat of paint on the wall and pretend all is well. True Gospel unity and diversity is stunning, but when our structures begin to protect the teaching of termites, it’s time we reevaluate the build.