Caitlin Fitzsimmons has called for Australians to be more generous, and to give to charity outside the Christmas period. She offer some sage advice for all of us, and her points about generosity also got me thinking.

“Before we dive into the prolonged festival of consumerism that is the summer sales or turn our thoughts to the new year, let’s pause to reflect on the season of giving.

December is the third-biggest month for charitable giving behind May and June, the two months before the end of the financial year when people are trying to maximise their tax deductions, according to Commonwealth Bank figures.”

“The lead-up to Christmas is when many charities give a big marketing push to drum up donations. It’s also a time of greater need, especially for organisations that help disadvantaged families in Australia or rescue abandoned pets, for example. But no matter the cause, the need doesn’t disappear in January.”

Fitzsimmons doesn’t want us thinking that we’re a nation of Scrooge’s. She proclaims that,

“The good news is that Aussies are generous year-round”.

So how generous are we?

According to research cited in the article, 2/3rds of Australians give to charity, totalling $4.2 billion. That’s not an insignificant sum, although it in fact equates to approximately $300 per Aussie. Hmmm. Generous? I’m beginning to wonder if Scrooge was an Australian.

Fitzsimmons goes on to offer some helpful practical advice about how to give to charity, and why it’s important for organisations to have knowledge of regular giving rather than one off guilt driven contributions.

It would be interesting to know what the average regular Church attender gives per annum. Based on many years of experience, working for and being a member of several Churches, I reckon that a conservative estimation would place Christian giving at 10 times the national average, and Christians often give without any tax benefits.

According to NCLS research (a national survey across Christian denominations, which involved 10,000s of participants), 66% give regularly, with 20% of attendees regularly giving over 10% of their income. It is important to note that these figures only include financial contributions to the local church, and does not include all the charitable giving beyond. Again, this is consistent with my experience of Christians and Churches. 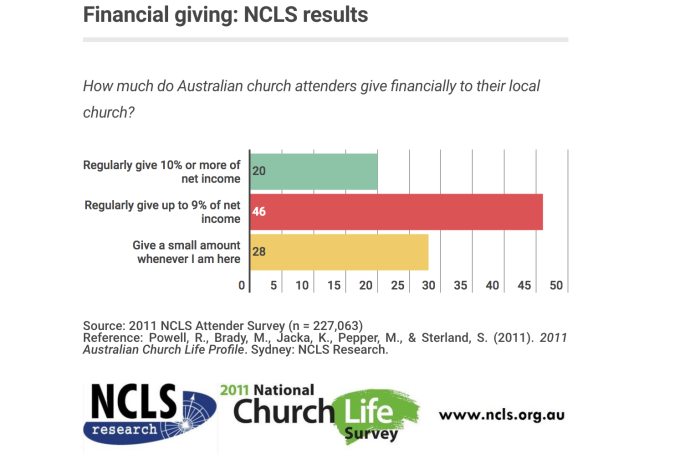 The question is, why is the gap between general Australia and Christian Australia so great? I’m sure that some Christians give out of a sense of obligation (although they should not), and others give because of a dubious understanding of Divine blessing (ie the prosperity Gospel). But those two reasons cannot explain the giving that continues in evangelical Churches across the country.

So what is the reason?

My hypothesis is a simple one, and it comes from the Bible: Grace changes peoples’ hearts.

“Each of you should give what you have decided in your heart to give, not reluctantly or under compulsion, for God loves a cheerful giver.” (2 Corinthians 9:7)

“For you know the grace of our Lord Jesus Christ, that though he was rich, yet for your sake he became poor, so that you through his poverty might become rich.” (2 Corinthians 8:9)

When you have come to experience the sacrificial love of God in Christ Jesus, and how the Lord of the universe gave up everything, even his life on the cross, this good news changes you inside and it reorients the way you view your income and the way you look at other people. I’m not suggesting that Christians are better people; Christians are ordinary citizens who face the same financial responsibilities as other Aussies. I am however proposing that there is a difference, and that difference turns on belief in the Gospel of Jesus Christ. The extraordinary gift of forgiveness that is found in Jesus, not only frees people to give generously but installs a joy in giving to others.

I happily join Caitlin Fitzsimmons in encouraging Australians to think about generosity in 2018, and we do so, I also encourage us to consider the greatest act of compassion and sacrifice the world has ever known.