China is pursuing its policy of Sinicization, reshaping Christianity into the image of the Chinese Communist Party.

The Australian newspaper is reporting that Beijing is to extend its deal with the Vatican, despite high ranking Catholic officials protesting, including Hong Kong’s Cardinal Joseph Zen.

“The two-year provisional agreement will expire next month.

Bishop Sorondo, a close friend of Pope Francis, is on record as claiming the ­Chinese state exemplifies Catholic social justice teaching, a claim dismissed as “absurd’’ by Vatican-based US cardinal Raymond Burke.

Renewal of the deal, which has given the Chinese state control over the appointment of bishops in China, would spark outrage across the church and cause deep sadness among persecuted Catholics in China and Hong Kong.

Renewal would come as religious persecutions are being stepped up in China, which is increasingly flexing its military might in the Indo-Pacific region.” 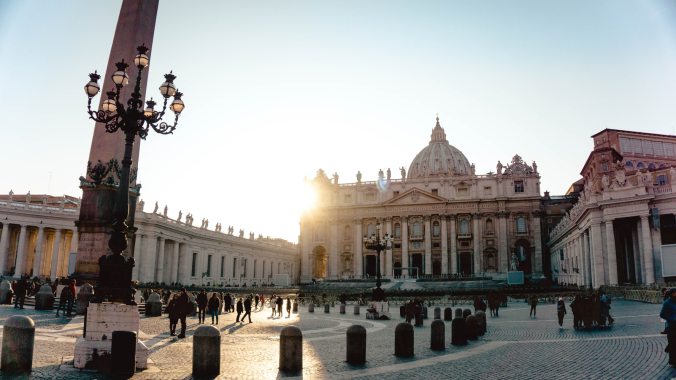 While the Vatican is refusing to release all the particulars of the arrangement, it is widely believed that it will allow the Vatican to have greater say in appointing future Bishops in China (but not full control). This is contingent upon Pope Francis formally recognising seven Catholics Bishops who have already been appointed by the Chinese Government.

“The ruling Communist Party sees the compromise with the Vatican as a step toward eliminating the underground churches where Chinese Catholics who refuse to recognize the party’s authority have worshiped for generations. With the pope now recognizing all bishops and clergy members in the official Catholic churches approved and controlled by the party, the underground church may have no reason to exist.

The move is part of a broader push by the government to clamp down on all aspects of society since Xi Jinping took power as the party’s leader in 2012.”

For the most part, in history, Church and State have been duly recognised as separate entities, concerned with different spheres of responsibility, jurisdiction, and authority. That is not to suggest that there is no overlap. The Scriptures themselves testify to this in places such as Romans 13:1-7. Indeed, the Apostle Paul on one occasion appealed to Caesar without any sense of overstepping the line.

At their best and when the dynamics are suitably valued and practised, the State and Church serve society in a healthy partnership, understanding their distinct roles and appreciating the other. It’s not as the State is void of religious content; Christians and non Christians alike, and people of other faiths, are welcomed into Parliament and can contribute ideas that have been formed by their convictions and worldview. We don’t live in an a-theistic state, but a pluralistic culture.

At worst, the State has intruded and sought to control or disrupt churches and even to work for their destruction. And Churches, in a vain attempt to retain some semblance of relevance or to keep their institutions alive, have become complicit with immoral and anti-Christian agendas.  We have seen this happen with Christian denominations capitulating on the marriage issue. This has happened amongst evangelicals in the United States as they conflate the cause of Christ with the Republican Party. Indeed, the Vatican’s deal with Xi Jinping is reminiscent of former days when Rome (and also some Protestant denominations) was found to collaborate with Nazism in the 1930s-40s. The idea was, if you keep our doors open, we’ll give you our support. We’ll betray your cultural heretics and cede some of our independence so long as you let us be.

The Lord of the Church once said, “What good is it for someone to gain the whole world, yet forfeit their soul? Or what can anyone give in exchange for their soul?”  Apparently, some ecclesiastical minds are of the opinion that one can do both.

When I wrote about this story two years ago, I suggested Daniel ch.3 as an analogy. President Xi Jinping is sounding like King Nebuchadnezzar, while Pope Francis is appearing as one of his astrologers who betrays Shadrach, Meshach and Abednego. Since then, more fuel has been added to the fire, and this new blast of oxygen from St Peter’s isn’t going to dampen the growing threat posed to Christians and religious minorities in China. It is one thing for the secular citizen to sell their the soul to a dominant regime, but for the overseers of a Church to throw into Nebuchadnezzar’s furnace the people under their care, they themselves are in danger of another fire where no angel will tread and save.

Communist China is an evil regime that has little regard for religious freedom, let alone political and social freedoms. The world has evidence of 1 million Uighurs, a Muslim minority group, being forced into concentration camps. For decades churches have been closed, destroyed, pastors imprisoned, and families threatened because they profess faith in Christ. Millions of Chinese Christians cannot meet to worship God in public or read the Bible. The threat of discrimination is a constant one. For the Vatican and Pope Francis to make a deal with the Devil is a grave misjudgment.

This is a timely reminder to thank God for the religious freedoms we enjoy in Australia, and not to take them for granted. There are sometimes tensions, but not every disagreement amounts to discrimination against Churches or religion in general. Nonetheless, this should also serve as a warning to Australian Churches and Governments alike.

When this deal with first agreed upon in 2018, I suggested,

“We are a long way from the politico-religious scene of our northern neighbour, and yet it is not irrational to suggest that should some Australian political parties and notable social commentators have their way, we would be aiming toward an Australian Sinicization, conforming Christianity into the likeness of Australian humanistic secularism.”

This threat remains. And no, I am not referring to current Governmental rules for religious organisations in the midst of the COVID-19 pandemic.

Writing for ABC’s The Conversation last week, Professor Nicholas Aroney spoke of new research that has found that government-based religious discrimination is on the rise around the world. While much of the attention is duly on other countries, he notes that “the threat in Australia is real”.

We are far from the situation found in Communist China, but we do have, for example, a State Government that has previously attempted to interfere with basic religious freedoms and is currently drafting legislation that may soon see parts of the Bible banned, classical teaching on marriage prohibited, and prayers for sexual sanctification outlawed. I am of course referring to the Victorian Government’s plan to introduce legislation in 2020 to ban conversion practices.

We need to guard our own backyard while also speaking up against religious suppression that is taking place across the seas.

One thought on “Vatican aiding China with Sinicization”