This afternoon news broke that the Federal Labor Party are considering agreeing to the marriage plebiscite, so long as this set of conditions are applied: 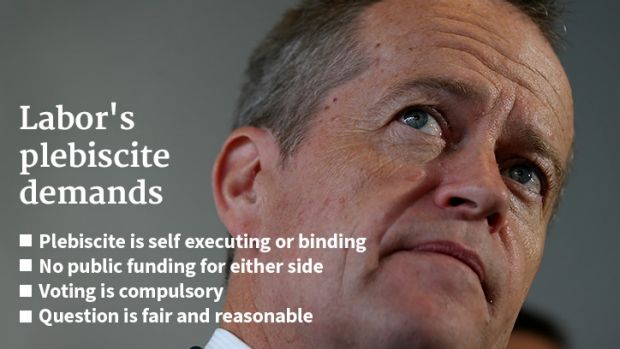 Photo from The Age

In my opinion these are reasonable requests and deserve due consideration from Malcolm Turnbull and the Cabinet. The Age is reporting that ‘Christian groups’ will be angered by list, but I don’t see any reason for objecting.

Of course, the big question is, what will the question be, and it is understandable that people will wait for this announcement before making a final call on support for the plebiscite; I don’t envy those who are responsible for framing the question.

My only qualification to Labor’s suggestion is that it is unreasonable to expect MPs to vote against their conscience, that is, should the Australian public vote to change the law. If the majority of Australians vote to change the Marriage Act, I don’t think MPs should vote otherwise, but should their conscience not permit them to support same sex marriage they should have freedom to abstain from voting. Therefore, a self executing  plebiscite is preferable (I’m not a lawyer, and so I don’t know whether this is possible and how this would work).

There is one vital  matter that has not arisen, either today or in most public discussions on the issue, and that is how redefining marriage will impact many other aspects of Australian law and life. Changing the Marriage Act is not so simple,  as though all we are doing is removing a couple of words. Rather there will be a significant ripple effect throughout  many areas of law, including discrimination laws, family law, and property and finance laws. For example, when the U.K introduced same-sex marriage, they produced a 62 page document outlining many of the laws that would require reworking in light of the change. The point is a simple one, we mustn’t think that should we vote to change marriage, the discussions are over. It is only fair that in the lead up to the plebiscite, the Government outline to Australians, details of the many implications that will arise from altering marriage.